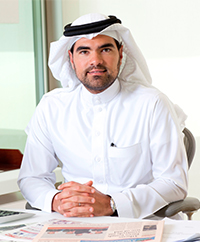 Rami Khalid Alturki is the President of Khalid Ali Alturki & sons (Alturki) which is a leading family owned investment and development company that has been operating in Saudi Arabia since 1975. Its subsidiaries and joint venture companies are focused specifically on the construction & infrastructure, building

materials, real-estate, oil field services & renewable energy, information and communication technologies, and general industrial sectors primarily in Saudi Arabia and neighboring Arab countries. In his capacity as President, he also holds directorship and chairmanship positions in the group’s various joint ventures and subsidiaries. Previously, Mr. Alturki held several senior positions with a variety of companies throughout the region as well as internationally, including President of Saudi Readymix, which is a wholly owned subsidiary of Alturki and is the largest supplier of concrete products in the Middle East ranking in the top 80 of 100 Saudi companies for the past 3 years, and chosen as one of the Saudi Fast Growth 100 companies, as well as the 9th best working environment in Saudi.

Mr. Alturki has over 15 years of experience in the business world working mainly in the US, Europe, and the Middle East. Apart from his role with various group companies Mr. Alturki is active with non-affiliated companies, he is currently a member of the Advisory Board of Gulf Capital, Abu Dhabi, and until recently was a member of the Board of Directors of Bakheet Investment Group and a member of the Internal Audit Committee of Walaa Insurance.

In 1995 Rami completed his BA degree in Economics from Williams College, Williamstown, MA in the United States.